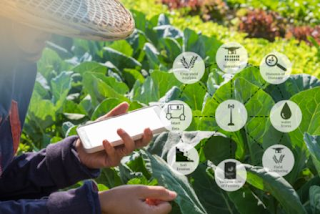 The Agricultural Extension was initiated in the fifties of the twentieth century in many of the developing countries. The study of the diffusion of hybrid corn by Ryan and Gross, in 1942 established the critical role of technological information for increased farm production. Agricultural extension education, as a part of agricultural sciences, branched off as a specialized field to help evolve the theory and practice of modern methods of agriculture. In the developing, countries even though, a large majority of the population is engaged in agriculture, the small and marginal fanners are not able to produce adequate food because of the subsistence methods of farming: In our country, the traditional way of tilling the soil and depending on the monsoons are very common. It was, therefore, considered necessary to help these farmers to change their agricultural practices, through extension methods so that they could adapt better practices and increase their output.

This approach, of spreading innovation, new ideas, practices, and technologies in agriculture to the farmers in the developing countries, became very popular as an agricultural extension during the 50s. Because of the heavy dependence of agricultural extension of communication techniques and methodologies, in due course, communication applied to agricultural extension came to be known as agricultural communication. This was the time when development communication, as a specialised area of communication, was recognized and became very popular. It slowly diversified into rural communication when extension Specialists with knowledge of communication principle transferred like health, hygiene, nutrition, sanitation, etc. Instead of confining developmental activity to the rural. areas alone, the urban section was also included to help the poorer sections living in the slums. Thug communication theory and practice applied to help stimulate the development process in general and branched off as the development support communication (DSC).
The DSC was a concept popularized by the UNDP and other UN institutions like FAO, UNICEF etc. The World Bank also supported the DSC. It stands for linking all agencies involved in the planned development work such as political executives, policy planners, development administrators, subject specialists, field workers, opinion leaders, the media representatives, the researchers and beneficiaries who constitute the final delivery points, and the consumers of information. Thus, the routes of communication envisaged are not only vertical from top to bottom and bottom-upwards, but also horizontal between the institutions and personnel connected with the process of development.
John L. Woods (1976) conceived a triangular nexus with three points:  Knowledge generators, political leaders and development knowledge-users, as shown below: 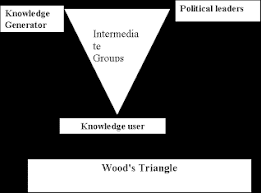 According to Ensminger (1962), “Extension is a programme and a process of helping village people to help themselves, increase their production, and to raise their general standard of living”. Further, he calls it a process of teaching under practical living situations.
The National Commission on Agriculture (Government of India, 1976) has a much broader perspective. Extention, in its view, refers to informal out-of-school education and services for the farming community, to enable them to adopt improved practices in the production, management, conservation. and marketing of agricultural and allied activities. The agricultural extension aims at not only imparting knowledge and securing the outlook of the farmer to the point where he will be receptive to innovation on his initiative, but also continuously seeking means of improving his farm occupation, home, and family life.
According to Shingi and others, extension in agriculture is an educational programme undertaken to Ltivate the process of the transfer of knowledge, science and technology from laboratories to people, to help them to help themselves, change their attitudes and skills, help them in farm planning, decision-making, record keeping, use of inputs, storage, processing and marketing, to ensure supplies and services, increase their production, develop the people and their leadership, and improve their occupation, family and community life (Shingi et al. 1982).
(Reddy, D.Narnsimha; Sridhara, B.A.; Rao, B.S.S; Rahim, Abdur)