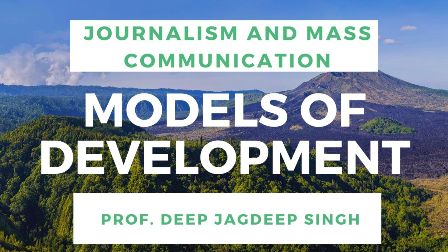 Development is a complex process of moving the nation ahead on the paths of better social and economic growth. This growth is achieved by eradicating poverty, starvation and boosting health, literacy, economic growth of under-developed areas of the nation.

What is the Model?
Model is a theoretical term used in research. A model systematically describes an object or phenomenon that shares important characteristics with the object and phenomenon. Models are used for the construction of theories. A model is a purposeful representation of reality. Model is a helpful tool to understand the specific phenomenon. Model is often used to describe an application of a theory for a particular case.
For example, Welfare Model of Development advocates the role of the state for the welfare of poor people of the state. It can apply the Maslow’s hierarchy of needs theory to elaborate that when the basic needs of people are fulfilled they can participate in the development of the nation. Thus, Welfare Model of development can purposefully represent the reality of the need for the welfare of poor people.
Scholars at research-essay explain the model in detail here, have a look.
Models of Development
Based on the various worldviews there is no consensus on the models of development because every scholar defines development with his/her own perspective. There is a number of models that have been applied in various regions of the world. Every model has its own theories and applicability based on how they are used. We are going to discuss six important models of development here.
Western Liberal Model of Development
Based on the theory Walt Rostow’s theory of The stages of economic growth this model states that societies undergo changes from traditional, transitional and modern stages. It focuses the political development on economic development. It advocates rapid industrialization, technological advancement, modernization, full employment. According to this model, to achieve these goals the process of liberalisation of society, economy and polity must be constant. It relies more on individual development instead of collective or community level development and for this, it supports free-market economy and competitiveness. it is also called a market model of development. This kind of model helps the developed countries to dominate developing countries.
Luiz Carlos Bresser-Pereira Emeritus professor of Getulio Vargas Foundation explains the application of this model in various countries of the world his essay Five models of capitalism
Welfare Model of Development
According to Will Kenton, “Welfare state refers to a type of governing in which the national government plays a key role in the protection and promotion of the economic and social well-being of its citizens.” As described in the example above this model stands for the welfare of people. It advocates the role of the state (government) in the socio-economic development of society as a whole. It emphasizes that the state should play a role of the welfare state and it should make planned and organized efforts to rapid industrialization, economic growth and socio-economic development. It insists that providing education, health, employment, social security and public distribution system is the responsibility of government. It advocates protecting the weaker section of the society and stands for the protection of social, economic and political rights of all the people. Many developing countries adopted this model of development.

Assar Lindbeck details about the Background, Achievements, Problems of Welfare Model of Development.

Socialist/Marxist Model of Development
There are various sections of the socialist/Marxist model having different views about achieving socialist development goals. Democratic socialists believe in attaining the development goals through democracy while the Marxist Socialists and Revolutionary Socialists believe in the revolutionary means to achieve power. They insist upon a centralized political system to maintain that power and use it for the economic and political growth with rapid industrialization, progress and development. It rejects capitalism and open-market. This model emphasis on equality and rights but keeps a tight hold on people. With the time socialist/Marxist countries opened up for the open market to match the pace with another world.

Will Kenton, elaborates upon the socialist model of development as well as presents a comparison between the Socialist model and Western Capitalist Model.

Democratic-Socialist Model of Development
This is the amalgamation of the democratic model and socialism. Third world countries like India combined democratic socialist model and welfare state model to make a balance between rapid industrialization and welfare of the people. This model uses planed and organized policymaking mechanism to achieve the socio-economic development of people. But it failed to bridge the gap between rich and poor in many countries.
Further, with the globalization, these countries adopted an open market economy and privatization, which resulted in a wider gap between rich and poor.

Nitisha delves into the Origin and Tenets of the Democratic-Socialist Model of Development.

Gandhian Model of Development
Gandhian model of development is based on the philosophy of Mahatama Gandhi. This model advocates that development can be achieved by adopting moral development. Social, economical and political development is based on ethical view. Truth and non-violence is the basis of this model. It advocates for decentralization of power and distributing the power to villages. Every village would be acting as an independent, self-sufficient and self-regulating unit of the nation. The importance is given for ensuring food, clothes, shelter, education and employment to everyone
Instead of industrialization, it stands for manpower. This model emphasis upon the industrialization based on manpower not on machines and this must be aimed at fulfilling the basic needs of everyone. Contrary to promoting larger industries it stands in favour of cottage industries, handicrafts, agriculture and labour. It strongly recommends that development must be based on happiness and satisfaction, not on materialism and wealth-creation. It also stands to maintain the good health of the environment.
Following Slides describe the Gandhian model in detail, have a look
Gandhian Concept of Development from Richi Simon
Sustainable Development Model
This model focuses on the balance between development and the environment. The human race has largely depleted the environment and natural resources for the socio-economic development which resulted in degradation of the quality of life. Thus, this model emphasis on sustainable development based on the balance between human needs and natural resources. It advocates for eco-friendly technology, controlling air, water and soil pollution along with every kind of pollution that impacts the environment and all the species on the planet. It stands for the sustainable development that fulfils the needs of the present generation as well as maintains the environment to fulfil the needs of future generations.

Meenakshi Malle explains the various aspects of this model in her Essay on Sustainable Development.