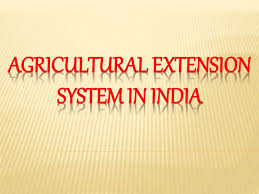 The national extension service of the early fifties, with its broad objective of improving the management of the traditional agriculture, envisaged participation of elected representatives of the people, a network of village-level functionaries and subject matter specialists, and the greater use of audio-visual aids.

The Intensive Agricultural District Programme (IADP) of the sixties was envisaged to impart knowledge about innovations like improved agronomy practices, better quality seeds, chemical fertilizers, pesticides, implementation, soil and water management practices, and other services like research, information, credit, storage, marketing and related supplies. The approach included technical support to the extension workers, better administrative coordination, and establishing a link between education and input. The extension efforts were made goal-oriented by concentrating on these activities.
An examination of the functioning of the IADP showed that, except for incremental wheat production in a few districts, the results were not satisfactory in a majority of districts. As a result, a new approach called the Intensive Agricultural Area Programme (IADP), concentrated On areas having assured irrigation. The High Yielding Varieties Programme also met with only limited success in’meeting the developmental goals (Mehta, 1975).
By the mid-sixties, a programme on national demonstrations was launched to popularize the superiority of the new technique; through on-farm demonstrations, determine on-farm applicability of research recommendations, give confidence to the extension workers about the suitability of the new practices, and establish a direct link between the scientists and farmers so that the latter could understand the field problems better. The emphasis was on demonstrations and group discussions.
The limited performance of the green revolution has led the government, with the help of the World Bank consultants, to work out a new approach to tackle the problems of agricultural extension. The new approach, known as the TV system, formulated in the mid-seventies and operationalized in 1978, is based on the Benor Concept.
Strengthening Organizational Communication
The TV system makes deliberate efforts to obtain relevant technical information; debate its utility and applicability; break it down into manageable segments; simplify it so that it can be communicated effectively and pass it on selectively. While information passes through a hierarchy, every unit in the sequence is provided with sufficient autonomy and self-control.
This system has the potential of increasing the technical and persuasive capacity of both the farmers and the extension personnel.
These slides explain various programmes and schemes used in India for agriculture extension, have a look:
Agriculture Extension system from sagir ahmed
System Approach in Agricultural Communication
The communication support for agricultural development is intended to provide knowledge and skills about improved agricultural technologies to induce a change in the existing farm practices for increasing agricultural output. In our country, agricultural communication forms a part of the overall agricultural extension strategy. According to K.N. Singh, the agricultural communication follows a system approach, consisting of three different sub-systems: (1) Research System (2) Extension System and (3) Client System.
Based on the research literature, four key elements in the agricultural communication process were identified as follows:
Sources: Agricultural scientists, inventors/researchers, extension workers (like the VLW), contact farmers, salesman, etc.
Messages: New technologies, fertilizers, pesticides, new practices, new’ tools and implements in agriculture, animal husbandry and allied areas.
Channels: Inter-personnel channels like extension workers, opinion leaders, the mass media lie the radio, television, films, print channels like pamphlets, audio and video cassettes, and the folk media
Receivers: The farmers, both male and female, and others adopting new technologies in allied areas like animal husbandry, pisciculture, social forestry, etc. In the dissemination of information in agricultural and related areas, a large number of channels have been reported. These include extension personnel, village institutions, fanners, fairs, demonstrations, commercial agencies selling seeds, fertilizers and pesticides, bank officials involved in agricultural credits, the mass media channels like the newspapers, specialised farm journals, the radio. films and television. But in our country, a lot of information gets percolated mostly by word of mouth through non-institutional sources like local leaders. progressive fanners, neighbours, friends, and relatives.
(Reddy, D.Narnsimha; Sridhara, B.A.; Rao, B.S.S; Rahim, Abdur)