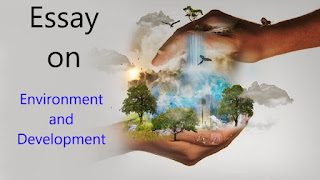 In 1987, the World Commission on Environment and Development, a United Nations body, published its findings in ‘Our Common Future’, known as the Brundtland Report. It says that problems of environment and development are interlinked and that economic interdependence among nations is increasing.’ Areas focussed on included:
It calls for economic growth based upon ‘sustainable development-meeting the needs of the present without compromising the ability of the future generations to meet their own needs. The Brundtland Report called for continued economic growth while emphasising the need to integrate environment and development.
Activities such as the burning coal and other fossil fuels and the use of CFCs as aerosol propellants are leading to a build-up of greenhouse gases in the atmosphere, resulting in damage to earth’s climate. The Intergovernmental Panel on Climate Change (IPCC), looking at the climate processes, concludes that. if there is no change in emissions of greenhouse gases, the global mean temperature would rise by about 0.3-degree celsius a decade in the 21st century, faster than at any time in the past 10,000 years. An increase in global temperature could, in turn, lead to major problems for mankind.
However, as the problem is global in scope, the different countries of the world must take measures to control greenhouse gases together. India is an active member of the IPCC, which was set up in 1988, and is jointly sponsored by the UNEP and the World Meteorological Organisation. In December 1990, the UN established an intergovernmental negotiating committee to prepare a framework convention on climate change. India is playing a prominent part in these negotiations, and also supports the IPCC which provides help to the negotiations by scientific advice on climatic change.
Deforestation can also contribute to the build-up of greenhouse gas in the air, both by the loss of the trees’ ability to absorb carbon dioxide and by releasing the carbon stored in them as carbon dioxide and methane. Apart from encouraging afforestation, the government should support many projects to promote good forest management.
Ozone Layer: In recent years, scientists have become very concerned about damages to the ozone layer, which protects the earth from harmful ultra-violet rays of the sun. Much scientific evidence has been gathered which implicates CFCs in stratospheric ozone depletion. In 1985, the scientists on the Antarctic Expedition discovered a ‘hole’ – an area of major depletion – in the ozone layer over the Antarctic, and evidence now shows that this significant ozone layer threatens mankind with increased diseases such as skin cancer, as well as the possibility of reducing the productivity of crops.
Economic Growth and the Environment
The environmental problems that countries face vary with their respective stages of development, the structure of their economics, and their environmental policies. Some problems are associated with the lack of economic development, inadequate sanitation and availability of potable water, and indoor air pollution from biomass burning. Many types of land degradation are a root cause of poverty in developing countries. Here, the challenge is to accelerate equitable income growth and promote access to the necessary resources and technologies. But, many other problems are made worse by the growth of economic activity. Industrial and energy-related pollution (local and global), deforestation caused by commercial logging, and overuse of water are the result of economic expansion that fails to take account of the value of the environment. Here, the challenge is to build the recognition of environmental scarcity into decision-making. With or without development, rapid population growth may make it more difficult to address many environmental problems.
Rapid population growth can worsen the mutually reinforcing effects of poverty and environmental damage. The poor are both victims and agents of environmental damage. Communication (DSC) Since they lack resources and technology, the farmers resort to cultivating hillsides and move into the tropical forest areas, where crop yields on cleared fields usually drop sharply after a few years. What pressures will economic growth place on the natural environment in the coming years? If environmental pollution and degradation were to rise in step with a rise in output, the result would be appalling environmental pollution and damage. Tens of millions of people would become sick or die each year from environmental caused diseases or disasters. Water shortages would be intolerable, and tropical forests and other natural habitats would decline to a fraction of their current sizes. Fortunately, such an outcome need not occur, if sound policies and strong institutional arrangements are put in place.
DSC and Environment
Ignorance is an important cause of environmental damage and a serious impediment to finding. solutions. This principle holds for international negotiations and poor households alike, as is illustrated by the global damage done to the ozone layer by the CFCs and the serious implications of indoor air pollution, like smoking, for family health. Fit, it is necessary, to know the facts; second, to determine values and’analyze the benefits and costs of alternative measures; third, to ensure that information is available on the public and private choices.
The DSC regarding environmental issues increases access to information. Many governments encourage the involvement of the local population in tackling environmental issues. But if such involvement has to be effective, the local people need to be w

ell-informed. Some ways to achieve this are: