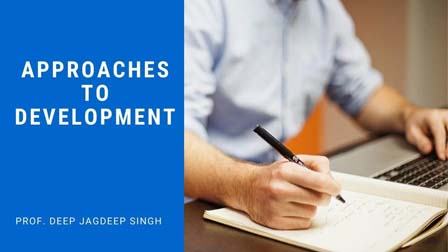 What is Approach?
The approach is a way to look at the problem. In simple terms, it is the direction we take to reach our destination. In theoretical terms approach is a way of looking at and then explaining the problem. Then it helps us in taking a direction to solve that problem. We can approach any problem from any direction but what would be the appropriate approach depends upon the available resources, nature of the problem and our ability to solve it. For example, suppose we need to reach to Delhi from Amritsar in a limited time. We have many approaches to reach there. We can go in our own car, take a taxi, flight, train or bus. But it will depend upon the person and his financial and other circumstances to choose the right approach.
Now, let’s discuss the approaches to development. As we know that development means the social and economic growth of society to improve the living conditions of people. So to approach development we have various approaches. Many approaches come from the economic perspective and others look at it from a social perspective. Even each and every scholar of economics and social sciences take different stances about these approaches. That brings forth a various set of approaches with these broad disciplines.
Social Approaches to Development
The Territorial Approach
This approach means that development is focused on a territorial level. Development plans and policies are made considering the strengths and needs of the territory. Geography, natural resources, human capital, skills and weakness are kept in mind while designing and executing the development plans. Local characteristics like culture and lifestyle remain at the core of such an approach.
The Participatory Approach
It is an approach that gives power to common people. The development process involves the participation of the public that will be the beneficiary of such development. People participate in the decision making, executing and feedback throughout the development process. This makes the public an active part of social change.
The Gender Approach
Gender approach is based upon the various genders of the society. Traditionally, the role of men and women are considered important in the development process. This approach looks at the social, cultural and economic roles of the genders while taking their relationship into consideration. Skills and powers of both the genders are invested in the development process. This approach emphasizes the mutual partnership of men and women to achieve equality between both the genders.
The Environmental Approach
This approach is based on the environment and its importance to achieving sustainable development. It considers the judicious use of natural resources water, air, soil and flora and fauna to achieve social development. It tracks the impact of development activities on the environment. That helps the policymakers to minimize the adverse effects on the environment due to the massive development projects.
The Partnership Approach
This approach of development brings all the stakeholders of development into a collective group. Every stakeholder, central government, state governments, administration, civil society, local governments and social service groups come together to achieve the common goals.

Monsieur Abdrahamane F. BAGAYOKO discusses the importance, objectives and challenges to these approaches in this essay.

So this is one set of social approaches to development. Another set of social approaches to development emphasis on rights, needs and market. These approaches are:
Right-based Approach
This approach is based on the rights of various segments of society. Its emphasis upon the idea that the section deprived of its right must be empowered and policies should to made to fulfil their rights. Government is the prime duty-bearer to fulfil these rights. The government should be accountable for the upholding of human rights and should make actionable policies to stop the violations. This way it helps to fulfil the basic needs of the rights deprived society and bring them to equality.
Need-based Approach
This approach keeps the needs of the needy and weaker-section in the centre. It emphasises that weaker sections need support in every possible way. Everyone including government and powerful sectors should provide support until marginalized sections are uplifted up to equality. It focuses on basic needs like food, clothes, shelter and social security.
Market-based Approach
It focuses on employment where everyone is working and contributing to the economy. It emphasises that the government should create employability and environment to create economic opportunities for the people living in poverty. It insists on making weaker sections, especially women self-reliant and to support them to play an important role in the economic development of the society.
After discussing these two sets of social approaches to development, we move forward to look at it from an economic perspective. Now if we approach development from an economic perspective we have various economy based approaches to reach towards the development goals. These approaches are:
This table describes the strengths and criticism of these approaches in a very lucid manner here.
Top-Down or Trickle-Down Approach
Supporters of the trickle-down approach believe that rich businessmen and companies are the backbones of the economy. They advocate low tax rate, limited restrictions and boosting the bigger projects. They believe that the economic resources created by the wealthy will trickle down to lower segments of the society. That will help them to uplift their current situation.
Bottom-Up or Grass Route Approach
This approach focuses on the lower sections of society. Scholars advocating this approach say that helping people getting out poverty is important for development. The government should make policy on making poor people self-sustainable. That will help them to be part of the larger economy. For this, they must be provided with better living conditions, education, health facilities and better infrastructure.
Growth Pole Approach
This approach supports the development of a core point or centre to grow and let the ripples of its growth spread to farther. According to this approach, the strongest sector is given a boost which strengthens the total economy around it. For instance, the green revolution was centred on the states of India with the best natural resources for agriculture. Punjab became one of the pole or core point for agricultural growth of the country and helped the nation to be self-sustainable for food grain. Likewise, many cities of Punjab were designated for particular industries to grow. For instance, hosiery and cycle industries develop in Ludhiana and leather industry was given a boost in Jalandhar.
Fair Trade Approach
This approach is based on creating a meeting point for demand and supply. The producers of poorer countries are provided with a platform to meet consumers of richer countries. The producers are paid fair prices for their products and consumers get the products according to their needs. Emphasis is given for long term agreements which help producers to develop a sustainable economy while the consumer gets constant supplies.
Regional Development Approach
It focuses on creating a balance between regional and national development. Scholars of this approach advocates strengthening the regional areas of the country to reduce the disparity between rural and urban areas. It stresses on building infrastructure at the regional level. Further, rural areas must be connected to an urban area with proper transport and communication infrastructure. That will help to reduce the migration from rural to the urban region and help to strengthen the economy at the regional level.
Export-led Growth
Every country is unique for its climate and geographical structure. This gives each country an opportunity to produce something which is needed at the other end of the world. Like gulf’s economy revolves around the export of crude oil. This approach says that the government should make policy and support financially to promote such industry which can boost the export-led growth.
Import Substitution Approach
As the name suggests this approach purposes decrease in the imports and substitute it with domestic production. India has achieved self-sustenance in food grain by boosting agriculture in Punjab and other states after independence. Earlier India used to import a large part of its food grain from foreign. This approach advocates that government should provide infrastructure, subsidies and financial support to boost domestic production to reduce imported burden.
Foreign Direct Investment
Foreign Direct Investment (FDI) is an approach to bring investment from other countries to boost the domestic economy. Many big projects need larger investments which can be invited from foreign. That will pump extra financial resources in the country’s economy and help to develop other sectors. This policy is promoted and encouraged by the World Bank.
With this, WE reach at the end of different economic approaches to boost the development of a country. Following slides throw light on these approaches in detail. Have a look:
Approaches To Development from Ecumene
As we have discussed, now we know that there are various approaches to look at the development process. So concluding this discussion about the approaches of development I give you an assignment, can you develop your own approach to development which may give a new boost to the economy and society? Reply with your approaches in the comments below.
-Prof. Deep Jagdeep Singh